Rotary International is an organization of service clubs known as Rotary Clubs located all over the world. It is a secular organization open to all persons regardless of race, color, creed or political preference. There are more than 33,000 clubs and over 1.2 million members world-wide. The members of Rotary Clubs are known as Rotarians. The stated purpose of the organization is to bring together business and professional leaders to provide humanitarian service, encourage high ethical standards in all vocations, and help build goodwill and peace in the world. Members usually meet weekly for breakfast, lunch or dinner, which is a social event as well as an opportunity to organize work on their service goals. Rotary's best-known motto is "Service above Self".

The Rotary Foundation is a not-for-profit corporation that supports the efforts of Rotary International to achieve world understanding and peace through international humanitarian, educational, and cultural exchange programs. It is supported solely by voluntary contributions from Rotarians and friends of the Foundation who share its vision of a better world. 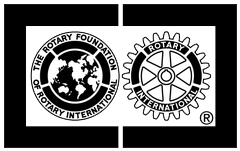 The Foundation was created in 1917 by Rotary International's sixth president, Arch C. Klumph, as an endowment fund for Rotary "to do good in the world." It has grown from an initial contribution of US$26.50 only to more than US$55 million. It is one of the largest and most prestigious international fellowship programs in the world.

The mission of The Rotary Foundation is to enable Rotarians to advance world understanding, goodwill, and peace through the improvement of health, the support of education, and the alleviation of poverty.

In order to carry out its service programs, Rotary is structured in club, district and international levels. Rotarians are members of their clubs. The clubs are chartered by the global organization Rotary International (RI) headquartered in Evanston, a suburb of Chicago. For administration purposes, the more than 33,000 clubs worldwide are grouped into 529 districts, and the districts into 34 zones.

Each club elects its own president and officers among its active members for a one year term. The clubs enjoy considerable autonomy within the framework of the standard constitution and the constitution and bylaws of Rotary International. The governing body of the club is the board of directors, which consists of president-elect, vice president, club secretary and treasurer, chaired by club president. The immediate past president is a de facto member of the board. The club president appoints the chairmen of the four main task groups for club service, vocational service, community service and international service.

Approximately 15 Rotary districts form a zone. A zone director, who serves as a member of the RI board of directors, heads two zones. The zone director is nominated by the clubs in the zone and elected by the convention for the terms of two consecutive years.

The chief administrative officer of RI is the general secretary, who heads a staff of about 600 persons working at the headquarters and in seven international offices around the world.

Rotary defines itself as a non-partisan, non-sectarian and secular organization. It is open to business and professional leaders of all ages (18 and upwards) and economic status. A cross section of its membership would suggest a tendency towards the middle-aged and wealthy.

One can contact a Rotary club to enquire about membership but can join a rotary club only if invited; there is no provision to join without an invitation as each prospective Rotarian requires a sponsor who is an existing Rotarian. The clubs have some exclusivist membership criteria: reputation and business or professional leadership is a specific evaluation criterion for issuing invitations to join, and they limit representation from a specific profession or business to a percentage of a specific club's membership.

Active membership is by invitation from a current Rotarian, to professionals or businesspersons working in diverse areas of endeavor. Each club can have up to ten per cent of its membership representing each business or profession in the area it serves. The goal of the clubs is to promote service to the community they work in, as well as to the wider world. Many projects are organized for the local community by a single club, but some are organized globally.

The family of Rotary extends beyond individual Rotarians and Rotary clubs to include other service-minded people who help with the organization's work. Groups such as Rotaract, Interact, andCommunity Corps serve side by side with sponsor clubs, usingdiverse skills to improve the quality of life in their communities. Below are some of the latest statistics available, as of 31 October 2011.

Ambassadorial Scholarships: The Foundation supports the largest non-governmental and most international scholarship program in the world. Scholars study in a country other than their own where they serve as unofficial ambassadors of goodwill. Since 1947, over 37,000 scholars from some 110 countries have received scholarships at a cost of almost US$446 million.

District Simplified Grants support the short-term service activities or humanitarian endeavors of districts in communities locally or internationally. This program began in 2003-2004 and, projects in 44 countries at a cost of US$5.2 million were awarded.

Group Study Exchange (GSE): These annual awards are made to paired Rotary districts to provide travel expenses for a team of non-Rotarians from a variety of vocations. Rotarian hosts organize a four- to six-week itinerary of educational and cultural points of interest. Since 1965, almost 48,000 individuals in more than 11,000 teams from more than 100 countries have participated at a cost of US$85 million.

Health, Hunger and Humanity (3-H) Grants fund large-scale, one- to three-year projects that enhance health, help alleviate hunger, or improve human development. Since 1978, projects in 74 countries have been funded at a cost of US$74 million. 3-H program is recently in moratorium.

Individual Grants support the travel of individual Rotarians, spouses of Rotarians. Rotaractors , and qualified Foundation alumni who are planning or implementing service projects. This replaced Discovery Grants and Grants for Rotary Volunteers and began in 2003-2004. Program awards were US$1.1 million.

PolioPlus: Rotarians have mobilized by the hundreds of thousands to ensure that children are immunized against this crippling disease and that surveillance is strong despite the poor infrastructure, extreme poverty and civil strife of many countries. Since the PolioPlus program’s inception in 1985 more than two billion children have received oral polio vaccine. To date, 209 countries, territories and areas around the world are polio-free. As of June 2004, Rotary has committed more than US$500 million to global polio eradication.

PolioPlus Partners is a program that allows Rotarians to participate in the polio eradication effort by contributing to specific social mobilization and surveillance activities in polio-endemic countries. In 2003-2004, grants were approved in Africa and South Asia for a total of $330,000.

Rotary Grants for University Teachers are awarded to faculty members to teach in a developing nation for three to ten months. Since 1985, 377 university teachers have shared their expertise with a college or university in a developing country.

Rotary World Peace Fellows: Each year up to 70 fellows at the level are sponsored to study at one of the six Rotary Centers for International Studies in peace and conflict resolution. In 2003-2004, 62 new scholars from 26 countries received grants totaling US$3.9 million for the two-year program.