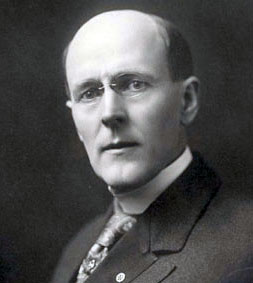 Paul P. Harris, a lawyer, was the founder of Rotary, the world's first and most international service club.

Born in Racine Wisconsin, USA on 19 April 1868, Paul was the second of six children to George N. Harris and Cornelia Bryan Harris. At age 3 he moved to Wallingford, Vermont where he grew up in the care of his paternal grandparents. Married to Jean Thompson Harris (1881 - 1963), they had no children.

One evening Paul visited the suburban home of a professional friend. After dinner, as they strolled through the neighborhood, Paul's friend introduced him to various tradesmen in their stores. It was here Paul conceived the idea of a club that could recapture some of the friendly spirit among businessmen in small communities.

Paul was also prominent in other civic and professional work. He served as the first chairman of the board of the national Easter Seal Society of Crippled Children and Adults in the U.S.A. and of the International Society for Crippled Children. He was a member of the board of managers of the Chicago Bar Association and its representative at the International Congress of Law at the Hague, and a committee member of the American Bar Association.

When President emeritus Paul Harris passed away on 27 January, 1947, his dream had grown from an informal meeting of four men to some 6,000 clubs. In the past five decades, the organization has grown to more than 31,000 clubs with 1.2 million members brought together through Paul Harris' vision of service and fellowship.

The world's first service club, the Rotary Club of Chicago, Illinois, USA, was formed on 23 February 1905 by Paul P. Harris (Pictured on the right), an attorney who wished to recapture in a professional club the same friendly spirit he had felt in the small towns of his youth. The name "Rotary" derived from the early practice of rotating meetings among members' offices.

Rotary's popularity spread throughout the United States in the decade that followed; clubs were chartered from San Francisco to New York. By 1921, Rotary clubs had been formed on six continents, and the organization adopted the name Rotary International a year later.

As Rotary grew, its mission expanded beyond serving the professional and social interests of club members. Rotarians began pooling their resources and contributing their talents to help serve communities in need. The organization's dedication to this ideal is best expressed in its principal motto:

Service Above Self. Rotary also later embraced a code of ethics, called The 4-Way Test, that has been translated into hundreds of languages.

During and after World War II, Rotarians became increasingly involved in promoting international understanding. In 1945, 49 Rotary members served in 29 delegations to the United Nations Charter Conference. Rotary still actively participates in UN conferences by sending observers to major meetings and promoting the United Nations in Rotary publications. Rotary International's relationship with the United Nations Educational, Scientific, and Cultural Organization (UNESCO) dates back to a 1943 London Rotary conference that promoted international cultural and educational exchanges. Attended by ministers of education and observers from around the world, and chaired by a past president of RI, the conference was an impetus to the establishment of UNESCO in 1946.

An endowment fund, set up by Rotarians in 1917 "for doing good in the world," became a not-for-profit corporation known as The Rotary Foundation in 1928. Upon the death of Paul Harris in 1947, an outpouring of Rotarian donations made in his honor, totaling US$2 million, launched the Foundation's first program graduate fellowships, now called Ambassadorial Scholarships. Today, contributions to The Rotary Foundation total more than US$80 million annually and support a wide range of humanitarian grants and educational programs that enable Rotarians to bring hope and promote international understanding throughout the world.

In 1985, Rotary made a historic commitment to immunize all of the world's children against polio. Working in partnership with nongovernmental organizations and national governments thorough its PolioPlus program, Rotary is the largest private-sector contributor to the global polio eradication campaign. Rotarians have mobilized hundreds of thousands of PolioPlus volunteers and have immunized more than one billion children worldwide. By the 2005 target date for certification of a polio-free world, Rotary had contributed half a billion dollars to the cause.

As it approached the dawn of the 21st century, Rotary worked to meet the changing needs of society, expanding its service effort to address such pressing issues as environmental degradation, illiteracy, world hunger, and children at risk. The organization admitted women for the first time (worldwide) in 1989 and claims more than 90,000 women in its ranks today. Following the collapse of the Berlin Wall and the dissolution of the Soviet Union, Rotary clubs were formed or re-established throughout Central and Eastern Europe. Today, 1.2 million Rotarians belong to some 31,000 Rotary clubs in 200 countries.